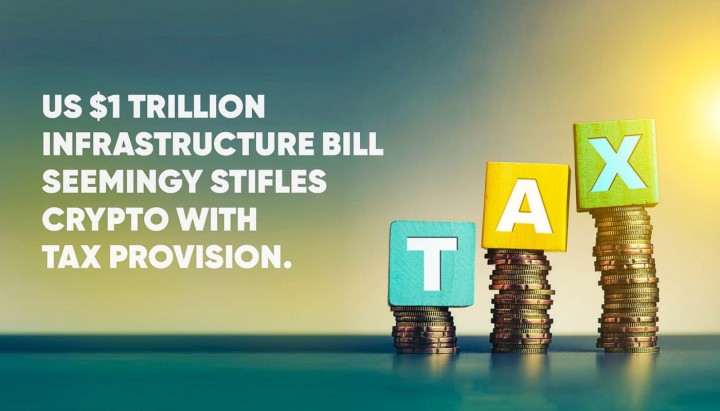 It is no longer news that the US Senate passed a sweeping $1 trillion bipartisan infrastructure bill on Aug. 10, capping weeks of intense negotiations and debate over the federal investment in the nation’s ageing public works system in more than a decade.
Initially, lawmakers proposed a provision that would force stricter rules on how “digital assets” are taxed to help fund the bipartisan infrastructure bill. This would require brokers to report gains in a type of 1099 form, in addition to the mandatory reporting transactions of more than $10,000 to the Internal Revenue Service (IRS).
This provision was met with backlash, as cryptocurrency advocates pushed for lawmakers to clarify the definition of a “broker.”
The case against the provision:
Crypto is a rapidly developing industry within the United States and this provision seeks to require those who buy and sell cryptocurrency to treat it the same way as they would the exchange of securities. This is problematic because crypto is different from securities.
“These aren’t just stocks. It’s something very different. It’s a medium of exchange that, if adopted more widely, could facilitate a lot of economic activities and a lot of innovation within the United States of America,” Lee said.
He also warned that if the bill gets passed, it’s going to have a chilling effect on innovation within because places outside the United States will be the ones to reap the benefit associated with the laws in the country if it adopts an unproven, untested, unknown strategy.
“If what you’re going do is take away that value by requiring that all of it be registered and publicly disclosed. Giving the federal government the ability to peer into it, you’re going to stifle innovation, you’re going to make a lot of people upset, and you’re going to make Americans poorer,” he added.
On Monday an amendment was sought to address concerns from the cryptocurrency industry that the original bill would require entities, like miners and software developers, to report tax data to the Internal Revenue Service that they cannot access.
The failure of the amendment represents a blow to the crypto industry, which had pushed hard in recent weeks for more narrowly targeted oversight.
Currently, the bill defines a broker as “any person who (for consideration) is responsible for regularly providing any service effectuating transfers of digital assets on behalf of another person,” which advocates say is too broad.
In an effort to change the definition, Sens. Ron Wyden, D-Ore., Pat Toomey, R-Pa. and Cynthia Lummis, R-Wyo., introduced an amendment on Wednesday that explicitly excludes miners and developers. Their amendment has strong support from the crypto community. But on Thursday, Sens. Rob Portman, R-Ohio, Mark Warner, D-Va. and Kyrsten Sinema, D-Ariz., submitted their own amendment.
While the vote on both amendments is still underway, here’s what each could mean for the crypto industry and investors in the US
Kristin Smith, executive director of the Blockchain Association, said in a statement that the trade group and its member organizations will be “engaging with members of the House of Representatives to ensure the unclear and unworkable aspects of this provision are removed once and for all.”