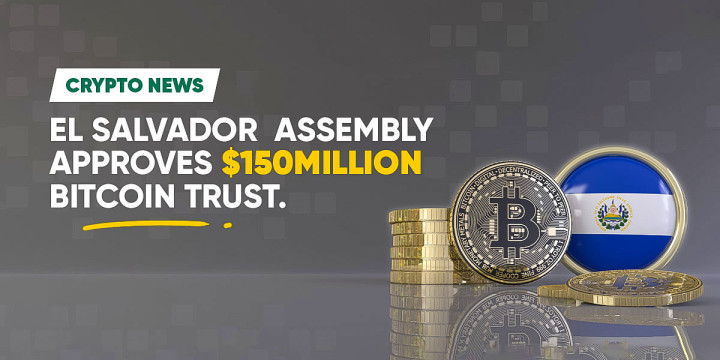 Sometime in June this year, El Salvador made the headlines for being the first country in human history to consider using Crypto (Bitcoin) as a legal tender. Sept. 7, 2021, will see this history made as the North American Country becomes the first in the world to adopt cryptocurrency as a legal tender.

Fast forward to Aug. 31, 2021. The Finance Commission of the El Salvadoran Assembly has agreed to create a $150 million Bitcoin trust. To facilitate exchange between Bitcoin and U.S. Dollars, the national newspaper El Diario de Hoy reports. Since 2001, the U.S. dollar has been the official currency in El Salvador which bitcoin will join and not replace as legal tender.

With 64 votes in favour and 14 votes against, the funding got approval as El Salvador prepares to officially adopt bitcoin on Sept. 7, 2021.

María Luisa Hayém Brevé, the El Salvadoran Minister of Economy, reportedly said that there is a possibility of increasing the initial $150 million allocations. She also touched on the fear and doubt El Salvadorans have shown as regards adopting Bitcoin. To this end, the government is doing its best to onboard El Salvadorans on the Chivo wallet.

However, one thing is that the financial world will be watching El Salvador in the coming weeks as it becomes the first country to adopt decentralized digital currency.

Despite the uncertain mandated nature of the Bitcoin law, El Salvadorans can decide to either accept Bitcoin or take $30 worth of Bitcoin commission-free. The Bitcoin Trust will help aid continued trade in dollars for those wary of this ground-breaking financial technology.

The parliament also agreed to change this year’s General State Budget to repurpose a $500 million loan from the Central American Bank for Economic Integration. To make provision for the Bitcoin trust to be managed by the Development Bank of El Salvador (Bandesal).

By Sept. 7, every El Salvadoran will have access to $30 in Bitcoin from the government through their Chivo wallet app. All bitcoins gotten or exchanged on the Chivo app will be commission-free, and citizens can begin to legally receive Bitcoin as payments without having to pay additional changing fees.

The purpose of this law is to financially support the alternatives that the state provides, without prejudice to private initiatives, that allow the user to carry out the automatic and instantaneous convertibility of bitcoin to the United States dollar.