Craziest Transactions In The History Of Bitcoin. 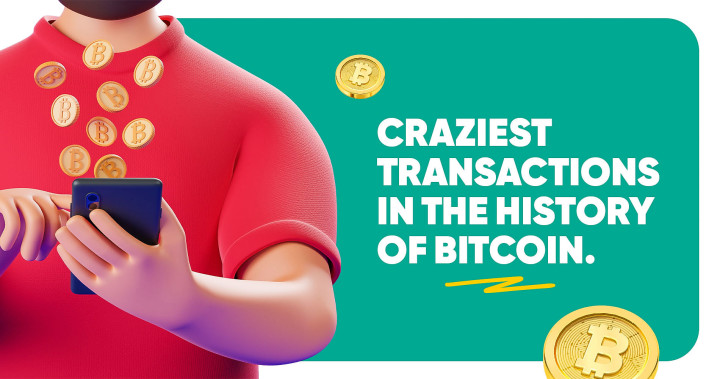 All bitcoin transactions are equal before miners, provided there is a sufficient fee attached. It makes no difference to them who the sender or recipient may be or how many BTC are transferred.

It is when we apply context that significance is attached to a transaction like an opcode. With over 360 million BTC transactions to date, this article details just 0.0000022%. But within this slender selection lurks a trove of Bitcoin history.

The truth is this, there is magic and mystery encoded in the blockchain if you know where to look.

We will show you!

First Actual Bitcoin Transaction
We might as well begin at the beginning, with the first BTC transaction sent between two people and the only one known to have been sent by Satoshi. It occurred in Jan. 2009, when Satoshi Nakamoto sent 50 BTC to Hal Finney on block 170. The cost of the transaction, like so many in the early days, was 0 BTC.

First Bitcoin to Fiat Sale
The first known sale of BTC in exchange for fiat occurred in Oct. 2009. When Finnish developer Martti Malmi sold 5,050 BTC for $5.02, with the fiat amount transferred via Paypal. The number of BTC sent corresponds with the fact that bitcoin could be obtained via mining.

The Famous Pizza Purchase
Laszlo Hanyecz’s 10,000 BTC pizza purchase is so famous that even nocoiners know about it. The details don’t bear retelling again: we’re only interested in the blockchain record for the legendary transaction. It resides here, in block 57043, which records the dispatch of 10,000.99 BTC on May 22, 2010. The 0.99 BTC on top, incidentally, was to cover the miner’s fee. That works out at a cool 4,191 sats per byte.

Gox Mega Transaction
When most whales wish to show that they own a particular bitcoin address, they’ll send a microtransaction from it. A few satoshis are all it takes to demonstrate proof of funds.

Mark Karpeles, the CEO of Mt. Gox in a show of strength, made a massive tranche of BTC from one wallet he controlled to another. After being pressed to prove the funds under his custody,

Leaked IRC logs allegedly show Karpeles offering to send 442K BTC, and blockchain records attest to this transaction taking place. In June 2011, 442k bitcoins were indeed sent to two addresses in a single transaction. It remained the largest amount of BTC ever sent at one time until November of the same year when 550k BTC was moved in one go.

Monster Transaction Fee
In 2013, a Redditor accidentally attached a 30BTC fee to a 98BTc transaction. Before his distress message could get any attention, not to mention help, his transaction had been added to the block. That worked out at 6.8 million sats per byte.

In the end, the mining pool that confirmed the block refunded 7.5 BTC, granting the generous fee payer some consolation. In August of 2013, someone sent a 200 BTC fee, which was returned by the mining pool that received it. Then in 2016, a transaction for 0.0001 BTC was sent with a fee of 291 BTC attached.

Bitcoin Fake Murder
On March 31, 2013, Silk Road operator Dread Pirate Roberts (DPR) sent 1,607 BTC to user ‘redandwhite’ to perform a hit on an individual who was extorting the deep web marketplace. The hit didn’t go through as it seemed very likely that redandwhite was both the assassin and blackmailer, but the transaction for an agreed price of $150k did. With 322,639 confirmations, there will be no rolling back this BTC transaction.

US Marshals Silk Road Auction
On July 1, 2014, close to 30,000 BTC was sent to the winning bidder in an auction held by US Marshals offloading assets seized from Silk Road. The auction was split into 10 blocks, and in the end, one individual won every single tranche. That bidder proved to be Tim Draper, and that acquisition, for approximately $18 million, proved to be a very shrewd investment.

Bitstamp Hack
Numerous bitcoin transactions can be connected to hacks. One of the most notorious is the near-20,000 BTC stolen from Bitstamp in 2015. This includes a 3,100 BTC transaction that kickstarted the attack.
With bitcoin’s value worth multitudes more than it was in the period spanning 2009-2015, headline-grabbing transactions are less common, but still newsworthy when they occur.

In the past fortnight, Binance sending over 100,000 BTC between wallets has caught people’s attention, as has a BCH address moving a total of 1 million bitcoin cash on the eve of the Nov. 15 hard fork. For so long as transactions occur on-chain and without the veil of privacy, bitcoins will continue to derive fascination from unusual blockchain movements.

El Salvador Plans On Making Bitcoin A Legal Tender. Twitter is set to launch a Bitcoin tipping service for users.